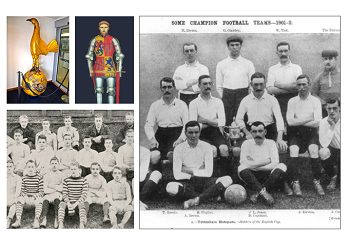 The origins of Tottenham Hotspur date back to 5th of September 1882 when a group of cricket loving schoolboys, led by Bobby Buckle, decided that they enjoyed each other’s company so much that they wanted to remain together during the winter months. Thus, one of the Worlds greatest Football Clubs was born. The boys took their name from the Shakespeare character Henry Hotspur, the Duke of Northumberland, who earned his nickname by the ferocious way he fought in battles. In fact, much of the land around Tottenham was owned by the Northumberland family. Inaugurated as “Hotspur Football Club” in 1882 the club was renamed as “Tottenham Hotspur Football Club” in 1894.  The lads soon gained a reputation of playing attractive football and started to draw large crowds to the lovingly prepared pitch on Tottenham Marshes.  A move to the Northumberland Park soon followed, and Spurs entered the FA Cup in 1894 beating West Herts (Watford), Wolverton, Clapton and drawing with Luton Town before losing the replay. Just seven years later Tottenham Hotspur would become the first Club since the formation of the Football league to win the FA Cup Trophy as a Non-League team in 1901 – a record which still stands to this day 120 years later.

Since 1901 Tottenham has has won the FA Cup a eight times, the Football League twice, the League Cup four times, the UEFA Cup twice and the UEFA Cup Winners’ Cup in 1963, the first UEFA competition won by an English team. In 1960-61, Tottenham became the first team to complete The Double in the 20th century.

By Paul Yarden, Founder and Editor of MyFootballFacts