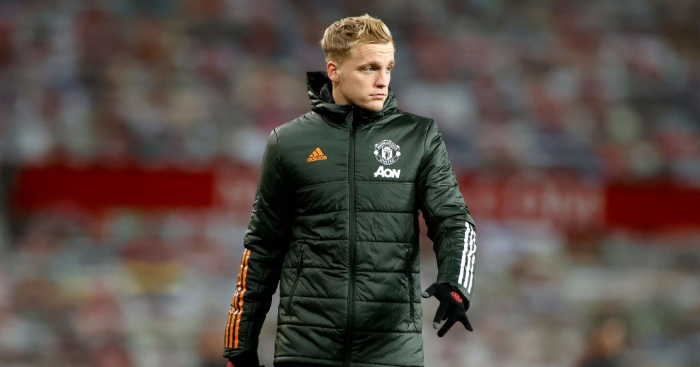 Manchester United star Donny van de Beek has been told to ‘pack his bags straightaway’ if he doesn’t feature in the Manchester derby.

The Dutch international arrived at Old Trafford from Ajax in the summer for £35million.

And the press in Holland isn’t happy.

A report in De Telegraaf (via Sport Witness) has advised Van de Beek to ‘pack his bags straightaway’ if he doesn’t feature for United against rivals Manchester City.

There are fears that the Netherlands international may be overlooked – or at least be off the pace – for the postponed Euro 2020 tournament if he is not handed more game time by Ole Gunnar Solskjaer.

And if minutes are not forthcoming he should be looking to leave this January for the sake of his future.

Solskjaer has previously defended his use of Van de Beek, claiming the midfielder needs time to adapt to English football.

The United boss said: “When players come into a new league, a new team, it’s always going to be a time of [transition]. When Donny has played, he’s played really well.

“I think it says a lot about our depth of quality in the squad that we don’t have to use him every single game because we have other players as well.”