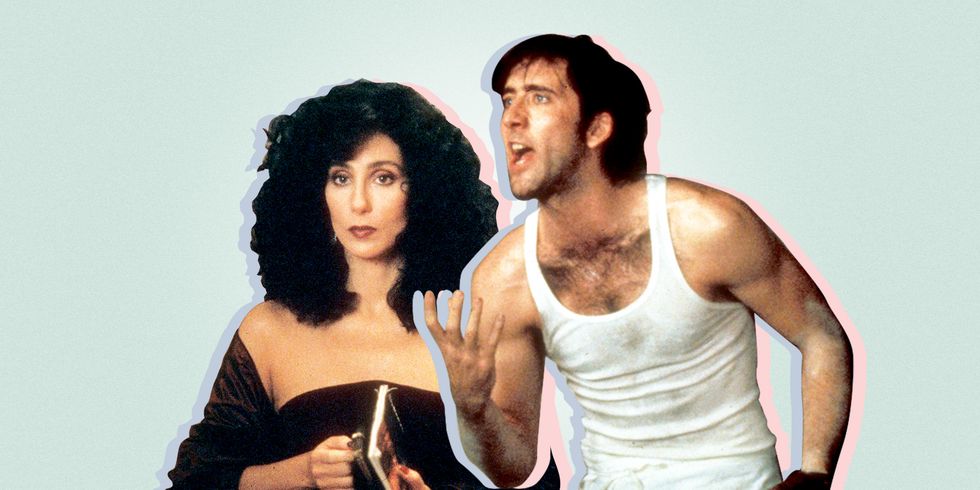 “Love don’t make things nice,” a tuxedo-clad Nicolas Cage pleads, the pomade in his hair gleaming in the moonlight. “It ruins everything. It breaks your heart. It makes things a mess!” Cher steps back, her stony face beginning to soften now. “We aren’t here to make things perfect. Snowflakes are perfect! The stars are perfect! Not us. Not us,” he continues. “We are here to ruin ourselves and to break our hearts and love the wrong people and DIE! The storybooks are bullshit!”

And then, as Cage bellows for her to come up to his bedroom, snowflakes burst into the frame and Cher peers up toward the night sky with a face that is welling up with tears. On the page, this may come off as melodramatic, or hyperbolic. But if you’ve seen Moonstruck, you know that this moment is anything but phony. Because, for Italian-Americans, everything is high volume. And those tears in Cher’s eyes, they’re not tears of sadness or fear. They’re the tears of a person who has, for the first time in years, allowed herself to experience joy. It’s a feeling of joy so real that it can knock you back on your heels.

Moonstruck is being released by the Criterion Collection today, bundled with a pristine-quality 4k restoration, a handful of interview featurettes, and an essay lovingly penned by film writer Emily Todd VanDerWerff. Sure, it’s not the most well-known movie about Italian-Americans. It’s probably not even in the top ten. But, when every other depiction of my heritage is dominated by violent, cigar-chomping goombahs, the experience of watching Moonstruck feels as revitalizing as a shot of anisette in your morning espresso. It’s a loving, non-violent portrait of Italian-Americans that I wish would get a little more airtime over the many, many gangster narratives that have come to represent our people.

“It’s immediately understandable,” Italian scholar Stefano Albertini remarks in the collection’s bonus material, talking about the film’s use of opera music. “It reaches the heart without passing through the brain. It touches you in a very special way.” Of course, he’s describing the effect of La bohème on Cher’s character, saying that the music “gets to her and touches the deepest chords of her heart.” But that’s actually a perfect summation of Moonstruck, a film that’s earned a cult following in three decades since its premiere, and has become so deeply ingrained in the lexicon of my Italian-American family that everytime I watch it, I half expect to see my mother walk into the kitchen and begin flipping some roasted red peppers on the stovetop.

The film, from its opening titles, which are set to “That’s Amore” (the Dean Martin version, of course), to its rousing final camera dolly, which ends on a smattering of dusty family photos of immigrant cugine in the old country, exists inside an imagined world where everyone, and everything, is Italian-American. Funeral homes, bakeries, wheels of provolone, helpless sons, their oppressive mothers; it’s all front and center in Moonstruck, hair-covered moles and all. And, yes, it’s by no means a real depiction of life–even in the densest Italian-American strongholds in South Brooklyn, no one can live on red wine and crusty bread alone–but it is nonetheless a familiar one. It’s familiar enough, in fact, to make you forget that it’s barely even Italian, at least not from the looks of the names on the credits, which hardly end in vowels at all.

Get Award-Winning Culture Coverage, Every Day

Written by an Irish guy from the Bronx (John Patrick Shanley), directed by a Protestant Canadian (Norman Jewison) starring a woman of Armenian descent (Cher), a Greek-American (Olympia Dukakis), Nicolas Cage (who, sure, is half Italian, though it’s never been part of his public persona), and a Russian (Feodor Chaliapin Jr.), the film might as well be an Italian-American costume party. I think Shanley (the screenwriter) puts it best, though. In one of the mini-docs on the disc, he admits that Italian-Americans were in the minority on the production of this film. But he says, laughing under his breath, that “after a certain age, everyone is Italian.”

I think that, really, is the lasting appeal of Moonstruck. While stories like The Godfather or The Sopranos make it clear that, unless you’re a man, unless you happen to have Italian parents, the door to the family is closed (sorry, Kay), Moonstruck gives everybody a seat at the table. There’s a universality to the film that makes it a very special, very unique portrayal of Italian-Americans. It’s not the only non-violent movie about Italian-Americans–Big Night, I guess, falls into the same category, though that one is really about Italian Italians who just came over the boat, not so much about the first, second, or third generation immigrants we see in most movies about Italian-Americans.

Moonstruck stands on its own by unapologetically placing a woman front and center, an Adrian-from-Rocky type, the kind you’d normally only see cheering from the sidelines, or, to borrow a line from Heidi Gardner’s SNL Weekend Update character, “taking the kids to [her] sister’s.” I can’t think of another movie quite like it. Sure, Cher’s character cooks a good steak; she shoots the shit in the hair salon; she can hold her own in a screaming match. But unlike Michael Corleone, Loretta Castorini doesn’t have a drop of cold blood in her veins. She’s stoic. She’s old-fashioned. Like my parents, like my cousins, like my grandparents, and uncles, and godparents, Loretta’s just a belly laugh away from inviting you to Sunday dinner (which shouldn’t start any later than 4 p.m., by the way).

The men in the film, too, are uniquely familiar in Moonstruck, albeit in a less attractive way. They’re hotheads, of course, they’re heartstrong, but they’re also stilted mama’s boys. Danny Aiello’s Johnny can’t even order dinner for himself, much less marry the woman he loves for fear it may, for whatever reason, kill his mother. Keep in mind, in a film like Raging Bull, we’d be expected to take a mammone like this seriously.

And then there’s the other type of Italian-American man, the Michael Corleone type–Loretta’s father, Cosmo. He’s cool. He’s collected. He’s mysterious. But as his wife points out (Rose, in an Oscar-winning turn from Olympia Dukakis), he’s just an aging loner who, like the rest of us, fears death. It’s a moment that makes Marlon Brando’s weepy bulldog routine seem silly as hell.

Of course we can’t speak about the men of Moonstruck without mentioning Ronny Cammareri, Nicolas Cage’s muscly baker who’s described by the film’s director as among the most “tormented” characters of all time (so he chose the most tormented actor he could find, he says). Ronny best embodies the type of guy we’ve come to know and love from movies about Italian-Americans. He’s the sensitive outcast who’s not beyond saving; he’s Tony Soprano; he’s Sonny Corelone; he’s Jake LaMotta in Raging Bull. But instead of forcing us to sympathize with Ronny and his dark, tortured past (“I lost my hand! I lost my bride!”), Moonstruck knocks him down a few pegs, portraying him–with the help of Cage’s trademark mania–as little more than a whiny goofball. “You’re a wolf,” Loretta tells him. “The big part of you has no words, and it’s a wolf…You’re scared to death!”

Back in college, I’d often stare at the posters in the dorms, and feel myself begin to transform into my father’s godfather, Uncle John. The posters–you know the ones–would cram together all the famous Italian-American movie characters into one poorly-illustrated gangster tableau. You’d see Vito Corleone drawn next to Joe Pesci and Robert De Niro in Goodfellas. Tony Soprano would be seated, Last Supper-style, with Paulie Walnuts and the Badabing gang. Maybe there’d be a random mugshot of the real Al Capone. And then Al Pacino would be there, his head thrown back, touting his gigantic machine gun from Scarface (which, by the way, is a film about an immigrant from Cuba, not Italy). ‘Medigans, I’d heard my Uncle John sigh. He’s an old-school, adamant proponent of the American Italian Anti-Defamation League. His generation hoped our people would amount to something more than gun-toting wiseguys.

And we did, of course. Descendants from the boot country have assimilated into American culture seamlessly; we churn the melting pot from seats of influence that go all the way up to the White House. But not in film and television. At least, not enough to get a film like Moonstruck onto the discount rack of a college dorm poster shop. Now, with the film receiving something of a cultural resurgence by way of the Criterion Collection (and a crop of loving fans on Twitter), I’m hoping Moonstruck will begin to get the respect it deserves. Sure, Italian-Americans aren’t perfect. But, to bring it back to Ronny’s theatrical proclamation from the beginning–“Snowflakes are perfect! The stars are perfect! Not us. Not us…Now I want you to come upstairs with me, and GET in my BED!”

Dom Nero
Video Editor
Dom Nero is a staff video editor at Esquire, where he also writes about film, comedy, and video games.