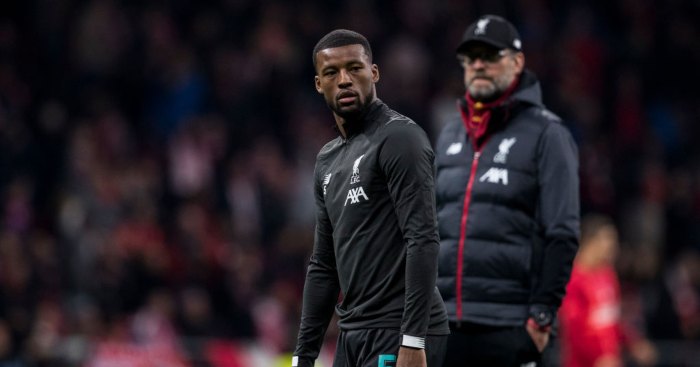 Barcelona boss Ronald Koeman is interested in bringing his compatriot to the Nou Camp.

The Duthchman remains a mainstay in Jurgen Klopp’s team despite just nine months remaining on his current contract and speculation he could leave for Barcelona.

Ronald Koeman wants to bring his compatriot to the Nou Camp having worked with him for the national team.

Thiago Alcantara’s arrival from Bayern Munich increased talks of an Anfield exit, but Klopp has insisted the Spaniard’s arrival had no bearing on the future of any of the squad.

But Wijanldum will be free to talk to other clubs in January about a move next summer.

And according to Football Insider, the 29-year-old has rejected the club’s latest contract offer.

The midfielder is reportedly holding out for a deal that runs until at least 2024, but the Liverpool hierarchy are reluctant to commit to a long-term deal on improved wages considering he turns 30 in November.

Klopp revealed earlier this month that he has held several meetings with the player to discuss his future.

He said: “Since Gini is here, I think I have had five, six hundred talks with him so that is always the same, nothing else to say about that.

“Of course I’ve spoken to him since he came back from international duty. Yes it is absolutely fine about the future.

“I can’t speak about the future in a few years but it is all fine for the moment. You know the situation.

“Between, me, Gini and the club everything is completely fine – apart from anything to announce to you.

“But that is more your problem than ours because we are completely fine about the situation.”